Our trip is filling up very quickly, and there is talk of Tim and Dede doing another one in March, 2016, so don’t worry!

Tim Weed, our guide, just returned from a National Geographic trip to the island, and he is really excited about our trip because he will be able to customize it more, and make it more personal and focus on art and culture.
Here is a slide show from Tim’s trip…. very exciting to think we will be there in November!

Tim and I are meeting next week to do more planning, but I wanted to link you all up to my gmail address for updates.
We have good news: The price has been dropped due to some costs associated with travel restrictions being lifted.
At this point, we have 14 people expressing very strong interest and half are already committed! Here is a note form Tim about our pricing and accommodations.
_____
What is the room situation? Rooms in the casas have 2 beds – but we can convert them to singles and I think the fee should cover it.
How large a group will be going? 16-18
How many of the eight days will we be in Havana vs. outside trips? About half and half.
And what sort of cancellation policy is there should I find I can’t make it? The deposit will have to be non-refundable. The rest should be refundable, although the closer we get to the date the less it will be, as we’ll be having to pay for plane tickets, ground costs, etc. But we should be able to fund a percentage of it right up to the date.
SIGN UP AT THE BOTTOM OF THIS POST, USING THE FORM, OR EMAIL Dede at dede.cummings1@gmail.com to sign up.
~~~~~~~~~~~~~~~~~~~
If you’ve ever thought about traveling to Cuba . . . here is a chance to make that dream a reality with a new, specially organized private small-group trip. This is not one of the mass-produced cultural bus tours you’re seeing advertised: this is a creative, one-of-a-kind, insider’s journey for intellectually curious travelers who wish to experience a side of Cuba that is seldom seen by American tourists. Our particular focus will be the country’s thriving arts scene: we’ll have unforgettable daily opportunities to interact with Cuban writers, visual artists, musicians, dancers, santería practitioners, scholars, and entrepreneurs. We’ll visit World Heritage historical sites, community arts projects, organic farms, sugar and coffee plantations, and cigar factories. We’ll have the opportunity to sample Cuba’s famous paladares (officially sanctioned restaurants located in private homes), and, of course, to experience Cuba’s world-renowned music scene. And we’ll strike out from Havana and into the countryside to experience some of the island’s beautiful landscapes, beaches, and hidden corners.

The trip will be led by Tim Weed, an author and widely traveled National Geographic featured expert who has made countless extended trips to Cuba since the late ’90s. Tim is a published novelist and a fluent Spanish-speaker with a deep and extensive network of contacts within Cuba’s arts, literary, and educational communities. The trip will be co-hosted by Dede Cummings, a writer/publisher, who also has agent experience, and a domain-changing editor who has traveled the globe.

D E T A I L S
Dates ~ November 14 – 22, 2015
Spots are beginning to fill up, so sign up provisionally using the form at the end of this post to receive updates for this trip if you are interested! Email Dede at dede.cummings1@gmail.com if you want to reserve right away, and we will hold a spot for you! In order to “officially” secure your place, you must send a deposit of $1000 by June 1, 2015. The trip cost of $3990, due by September 15, 2015, includes round-trip airfare from Miami or Montreal to Havana, visa, lodgings, meals, ground transportation, a Cuban guide (required), museum entrance fees, entry visas, exit taxes, guide and driver tips, and a tax-deductible contribution to the Brattleboro Museum & Art Center, the trip’s official sponsor.

“Cuando vayamos al mar yo te diré mi secreto.
When we go to the sea, I will tell you my secret.”

On this trip, we will have a chance to absorb a culture on an island that is rich in history and has had its culture preserved, due in part to the isolation as a Communist state in this hemisphere. This is a unique opportunity to join a small group of easygoing and open-minded travelers exploring a rapidly changing country that has been inaccessible to most U.S. citizens for over half a century in ways not available to mainstream tourists.

Our itinerary includes Havana and several locations in the island’s interior. Each day there will be one or more meetings with Cubans: writers, artists, academics, musicians, dancers, foundation officials, craftsmen, and entrepreneurs. Using Tim’s connections, we will have the opportunity go in-depth on such topics as Cuban literature, Cuban art history, the history of the Cuban Revolution, Santería, Hemingway in Cuba, US-Cuba relations, and new directions in Cuba’s vibrant contemporary arts and cultural scenes. We will visit an urban organic farm, the Caribbean’s largest colonial fortress, several World Heritage Sites, legendary Finca Vigía, where Ernest Hemingway lived and wrote for more than two decades, and the other important Hemingway sites in and near Havana, including the Hotel Ambos Mundos, where he wrote much of For Whom the Bell Tolls, the bars where he went for his various favorite cocktails, and the restaurant that became the setting for The Old Man and the Sea.

There will be plenty of down time as well—time for writing, sketching, and reflection. Because the group is limited in size, there will be a great deal of flexibility built in to take advantage of the interests of the people in the group, and enough spontaneity to seize upon anything interesting that happens to come up. For those interested in special areas like medicine (we have two doctors already signed up), Tim can arrange special hospital visits and other special requests.

“Cuba is trapped between two eternally competing visions. One is that it’s a socialist paradise; the other is that it’s a Communist hell. In reality, Cuba is neither a paradise nor a hell, but, rather, more of a purgatory, where some of us have the possibility of salvation.”
—Havana-based novelist Leonardo Padura

“When I first traveled in Cuba in 1999, it struck me, as it continues to strike me today, as an utterly unique place: a time capsule, an anomaly, a treasure trove of historical architecture, a country of great natural beauty with an inspiringly creative and resourceful population. What’s different today is that Cuba is changing, rapidly and dramatically. This is one of the reasons I’m excited about this new trip: in addition to being part of a small group exploring a country that has been inaccessible to most U.S. citizens for over half a century in ways not available to mainstream tourists, we’re going to be front-seat witnesses to history.”—Tim Weed 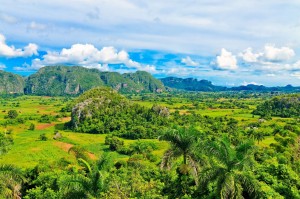 2 thoughts on “Going to CUBA! Update!”