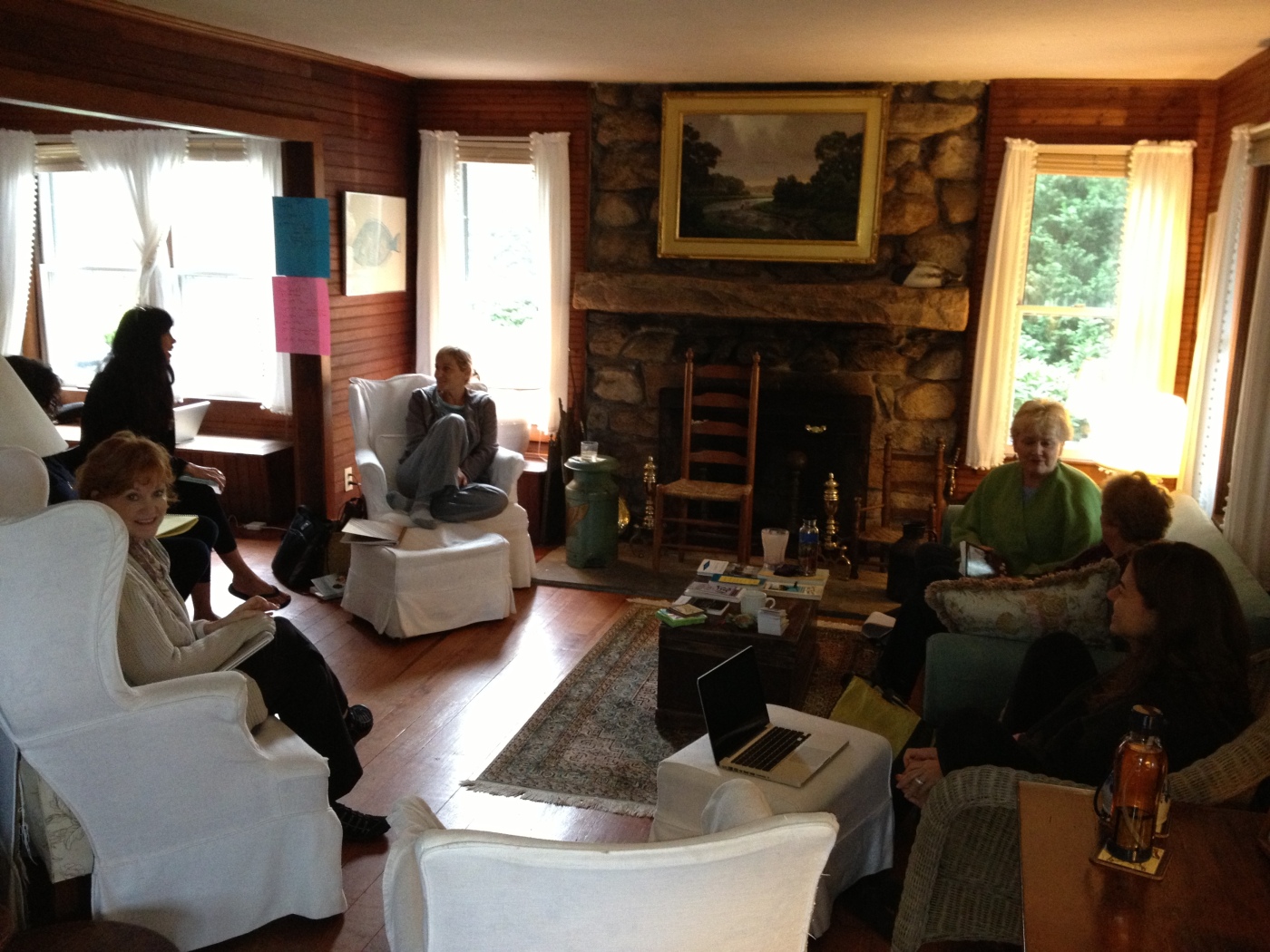 The Pond House Salon-Style Retreat— WE HAVE ONE SPOT LEFT!

Fall is coming and in that crisp beginning of the season there’s no better time to drop your daily to-dos and come join the muse.

If the open page is calling and your book dreams are knocking, get ready to answer the call with me and literary agent Dede Cummings during the 2013 Pond House retreat on the coast of Rhode Island, October 24-27 —the house was built in 1900, and sits on the water.

Four days of getting downloads about your book, kick-starting your project and giving you the oomph, pizzazz, and self-assurance to take your writing further than you’ve ever imagined.

The Pond House is one of those classic summer “cottages” from your best daydreams with wrap-around porches, sleeping coaches, a huge dining room (we cook for you!), a green sloping lawn to the water, walking trails and, just steps away, a crashing coast.

The Rhode Island retreat is all about sparking ideas, rousing the muse from your bed, jumping the waves, and bringing the page alive. In the end, you will have a sisterhood of writers and inspiration to bring home with you.

These salon-style retreats are domain changing. The method ceases negativity and resistance, re-calibrating and re-programming your body so you write from your strength rather than your weaknesses. The salon-retreat will uncover your most profound talents.

Finishing the book will become one of the easiest, most ecstatic experiences of your life.

Come join us. There’s no better time than right now to get a book published.

$1200 includes absolutely everything including bodywork, scrumptious organic food and one-on-one meetings about your project throughout the weekend. Register with a deposit of $600 before September 20th for a discount of $200!

A work in progress quickly becomes feral. It reverts to a wild state overnight… it is a lion growing in strength. —Annie Dillard

Dede had me in half a dozen major publishing houses the day after I sent her my book; within 48 hours I had an offer. —Katina Makris, author of Out of the Woods; host of “Lyme Light Radio with Katina”

Suzanne Kingsbury is the author of two coming of age novels, The Summer Fletcher Greel Loved Me and The Gospel According to Gracey, both published by Scribner, optioned for film and sold extensively in the States and abroad. You might have seen Suzanne in People magazine, Glamour and the LA times among many others. As founder of Wild Words, she developed a method of teaching built from neurotheologic research at Penn and Harvard. By ceasing activity in the part of the brain associated with negativity and resistance and focusing on writers’ strengths, any weakness in craft falls away, and writers can reach previously unimaginable creative heights. Writers who have worked with her have seen their books go into bidding words, garnered 6-figure advances and been on NBC, ABC and CBS affiliates as well as Forbes, the Jane Pauley Show and many others. She has helped hundreds of writers make their book dreams come alive. This year’s 2013 Writer’s Guide has named her one of the experts on creativity and the imaginative process. In Matunuck she we will meet with you individually to discuss your writing project and to help see you through to the places you want to go with your writing.

Dede Cummings started her literary career as a book designer for Little Brown & Company, and a designer and production editor for David R. Godine. As a designer, she is a six-time winner of the New England Book Award for a number of authors’ works, including Slow Learner by Thomas Pynchon, Voices From The Moon by Andre Dubus, a reissue of Borstal Boy by Brendan Behan, four books by Mary Oliver, and others. Dede is a 2010 graduate of Harvard’s “Publishing Books, Memoirs and Other Creative Non-Fiction,” and has since become a publicist and literary agent for emerging writers of all genres. Dede has been coined one of those most accessible and yet well-connected agents starting out in the business. Because she is an author herself, she understands both sides of the publishing process. She has been a contributor to Mademoiselle Magazine, Connotation Press, the Bread Loaf Writers Conference, and she received the Mary Dunning Thwing Award, a Bennington Writer’s Workshop award to study with Hayden Carruth, and was a semi-finalist for the Discovery/The National poetry award. Hatherleigh Press, distributed by Random House, published her own medical memoir, Living With Crohn’s & Colitis: A Comprehensive Naturopathic Guide for Complete Digestive Wellness, in 2010. Dede recently sold at auction, “Wonder Woman Isn’t Bulletproof,” by Shannon Galpin to Daniela Rapp at St. Martin’s Press. She has closed 13 book sales in her first year as an agent, including the upcoming lead title from Wisdom Publications, “Brave Parenting.” ​

Dede also enjoys her work as a public radio commentator for Vermont Public Radio, and she loves to hike, and knit, and read novels in her spare time. In Rhode Island, she will help you think about all aspects of publishing from pitch to publicity. Prior to the Retreat, she will attend the Bread Loaf Writer’s Conference where she will meet with other agents, publicists, and editors, with the intent to make contacts for her writers at this premier event. She is excited to meet you in Rhode Island.

Thanks for reading! Please contact us for more information: