“In To Look Out From, Dede Cummings takes good advantage of the imaginative fluidity that poetry offers. Even her poems of memory and family are driven by curiosity and enlivened by quick maneuvers and spritely turns. And she is careful never to leave the reader behind.” — Billy Collins 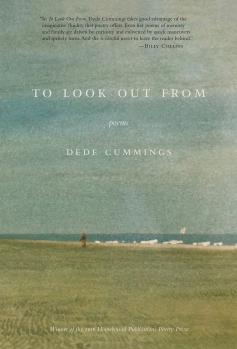 ily, memory, leaving home, and a mother’s grief; through poems that take the reader deep into forests and unexpected treasures found in nature.

According to acclaimed poet Clarence Major, “Dede Cummings’ poems in To Look Out From are breathtakingly vivid. Deeply felt, they often chronicle the relationship between self and the natural world, between self and others. These are New England poems that transcend New England. They are well-crafted testaments, often pastoral, to the cycles of life. At times they are elegiac and bittersweet, yet attentive in their hopefulness and trust in the Great Wonderments and mysteries. At times gracefully discursive and always brilliantly paced, they are poems given to recovery and renewal. This is a book I will read over and over.”

Dede Cummings is a writer, literary agent/publisher and commentator for Vermont Public Radio. At Middlebury College, she was the recipient of the Mary Dunning Thwing Award, attended the Bread Loaf Writers’ Conference as an undergraduate waiter, and studied with Hayden Carruth at the Bennington Writers’ Workshop. In 2013, she was a poetry contributor at the Bread Loaf Writers’ Conference. Her poetry has been published in Mademoiselle, The Lake, InQuire, Vending Machine Press, Kentucky Review, Figroot Press, MomEgg Review, Connotation Press, and Bloodroot Literary Magazine. She was a Discover/The Nation poetry semi-finalist and was awarded a writer’s grant and a partial fellowship from the Vermont Studio Center in 2016. Dede lives in Vermont where she designs books and runs the startup Green Writers Press.  She runs environmental writing and adventure travel trips, with Green Writers Press author, Tim Weed. (Author photo by Howard Romero.)

Advance Praise for To Look Out From

“Dede Cummings’ poetry collection To Look Out From celebrates the profound truths of love in all its forms: love of family and friends, romantic love, love of nature and the world, of language and of the divine spark that allows us, if we choose, to love one another more than ourselves. The poems in To Look Out From are as wise and kind as they are lovely. Written with great emotional force, To Look Out From is at once deeply personal and universal in its revelations of the power of love to make our lives and the places where we live meaningful.”—Howard Frank Mosher, author of Stranger in the Kingdom

“Achingly beautiful, reflective and tender. The poems in this collection glimmer with courage, love, pain, and truth. Like a luminous seashell found on a cloudy morning’s beach walk, To Look Out From is a treasure.” —Megan Buchanan, author of Clothesline Religion

“Pity the poet who writes of salt ponds and claw marks on beech trees without the requisite natural-world familiarity. Better: pity her reader. There is no doubt that Dede Cummings’s hiking boots have suffered the ravages of Vermont blizzards and the indignities of losing their way in muddy New England woodstocks. Her technically beautiful, dreamy poems span many years of memory and favor the cavorting of family life. The founder of Green Writers Press and a book designer, Cummings attended Middlebury College and the Bread Loaf Writers’ Conference.” —Foreword Reviews

I arise early morning in Vermont
Start the fire
And get the kitchen ready.
Without knowing,
I wrap my scarf around my head
And gently around my neck.
I feel contained.
A warmth around me, halo-like, and soothing.
My mind wanders, as I clean mechanically,
To women
Around the world
Wearing their own headscarves.

“When the voice of elegy steps forward here it often ends up celebrating experiences pared down to simple pleasure by the blade of grief. The comfort of a hot cheek on an icy windowpane, the revelation of the underside of leaves, obituaries that offer chronicles of untold happiness—such transformative surprises lead Dede Cummings to discover in the world ‘my prism.’ What an authentic, moving, and beautifully cadenced collection this is.” —John Elder, Stewart Professor of English and Environmental Studies at Middlebury College, author of Reading the Mountains of Home and Picking Up the Flute

“Dede Cummings’ luminous debut is a love letter to New England, exploring the intimacies of family and landscape. Speaking as mother, daughter, sister, and lover, her poems distill emotional truths as they move elegantly from grief to rebirth. Always attuned to our planet’s fate, To Look Out From burns with compassionate intelligence and a profound sense of place.” —Diana Whitney, author of Wanting It

“Dede Cummings has chosen the perfect title for her new collection of poems. Wherever we are in space and time that is where we look out from. We bring everything we are to that look-out point. Cummings reminds her reader that Henry David Thoreau says, so typically, It’s not what you look at that matters, it’s what you see. . . . Cummings was raised on the east coast and learned the sea’s ways from her father. . . . early on Cummings learned to look out from. But these are poems from a mature woman’s point of view, not a child’s. Cummings’ poems are about human connections, sexual and otherwise. . . A set of deeply reflective poems are built from the ordeal of the poet’s own daughter . . . Mature poems, indeed. And a great variety. Cummings pays homage to standard poetic forms, yet takes studied liberties so that her poems are hers alone.  She maintains a narrative line in her poems, but doesn’t hesitate to swerve when she feels the need. Fine details, word play, historical references, apt quotations—all the stuff serious poets work with—are here in this small collection.”  —Reviewed by Charles Butterfield for the Brattleboro Reformer

~~~~ INFO on the BOOK LAUNCH TOUR during APRIL 2017 ~~~~
I will be touring throughout the year, beginning April 7th at Next Stage Arts in Putney, Vermont, with poets, Megan Buchanan, James Crews, and short story writer, Tim Weed. There will be a launch party for our books April 7th at 7:00 PM. More dates below.  http://nextstagearts.org/event/green-writers-press-book-launch/?instance_id=19849